Has America Progressed Or Is It Just Spinning Its Wheels? This is the big question for our junior theme and I figured I might start thinking about it now. I want to focus on the growth/stagnation of the American auto industry.

America is a very car centered country, with our vast highway and road networks. The first affordable car was made by Ford in 1927 (the Ford Model T). This was also around the time when Ford created the assembly line to allow cars to be produced in large volumes for a low price. Since then through the Great Depression and World War II the three major companies prospered: Ford, General Motors, Chrysler. In the early 2000s around 5.7million automobiles were manufactured every year.

But somewhere, something happened. In 2008 as many of you know GM and Chrysler received a bailout by the US government. They received $17billion from President Bush and $12.5billion more from President Obama.

A lot of the US automakers lost sales to overseas companies in Japan and China. In the 1980s Japan was the largest producer of automobiles and in the 2000s it was China.

How has this demonstrated the US stagnating you ask? Well, I believe that the US auto industry is much like the political system in the US. We have high points and low points. Right now I believe that the political system is stagnating. With Republicans controlling the Congress and a Democratic President, many bills are not getting passed through due to disagreements in policies between the two parties. However, the government, just like the auto companies, needs a little stimulation. If a Republican President gets chosen in this upcoming election then more bills will be able to get signed into law, and as a result we will see movement and change in the American political system. It has yet to be seen if that change will be for better or for worse.

What do you think? Is no change better than worse change?
Posted by Joesh at 11:20 PM No comments:

Bernie Sanders: The Hero We Need? Recently I've been seeing a lot of articles on Bernie Sanders running for president. He has made some very unusual promises. He wants to: dismantle the NSA, dissolve the six "big banks, and start a "political revolution against billionaires".

Although his ideas seem far fetched, and many people may not agree with them, I believe that they force people to consider what is wrong with the US currently.

One of Bernie Sander's main objectives is to dissolve the six big investment banks in the US. Those banks are: Bank of America, JPMorgan Chase, Goldman Sachs, Citigroup, Wells Fargo, and Morgan Stanley. These are the banks that were deemed "too big to fail" during the financial crisis in 2007. These were the banks that got a $700 billion bailout from Congress in 2008. The reason is because if these banks failed the financial crisis would worsen.

Treasury Secretary, Henry Paulson, outlined the reasons for the bailout as:


These measures had to be taken or the economy would be in a free fall. These banks are also an interesting factor when it comes to the wealth inequality in the US. The CEO of Bank of America made $7.5million in 2012. The average american made roughly $50,000 in 2012. The CEO made 150x more than the average American. This should clearly demonstrate the vast division of wealth in the US.
Posted by Joesh at 8:02 PM No comments:

I've been thinking a lot about politicians and their standings on religion, not only that but religion in the US in general.

In the past the US has been predominately Christian (Protestant and Catholic). But I wonder wonder if that has changed. Especially with the rise of the internet, a medium to instantly spread and transfer new ideas. I found a very interesting graph that highlights the change in religious trends in the United States. 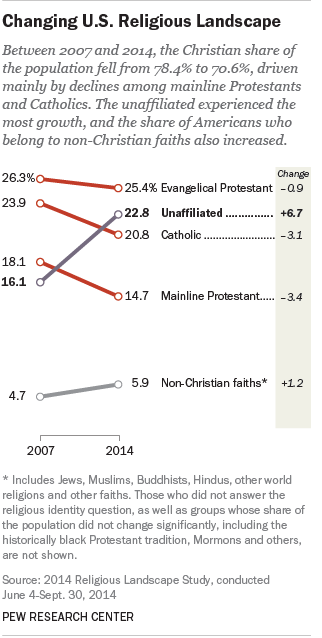 This graph is interesting to analyze. We see that from 2007 to 2014 there is a huge jump in people unaffiliated with any religion. From 16.1% to 22%. This could be attributed to the growth of the internet, but also it could be attributed to a newer chain of thought that the younger generation has gotten a hold of. I have a hunch as to the reason why. I think that many people now feel that religions like Christianity are too restrictive. The church doesn't allow gay marriage, birth control, abortions, and many other things. These are not in line with the thinking of the younger generations and as a result there is a spike in people who are unaffiliated with any religion.
Posted by Joesh at 12:10 AM No comments: 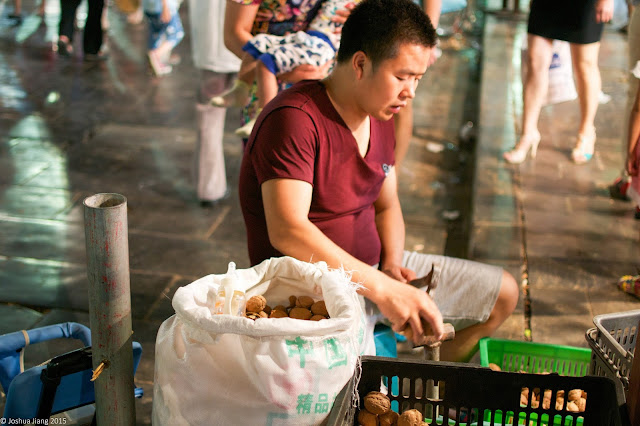 Climate Change and the Government

Ted Cruz is a Senator from Texas and a 2016 presidential candidate. Recently he has been in the news for dodging questions regarding climate change.

Recently after the floods in Texas he was asked if he believe the floods were caused by climate
change. He responded, “At a time of tragedy, I think it’s wrong to try to politicize a natural disaster".

Recently in class we talked about America's huge wealth gap and that got me thinking. How bad is it?

I found an article from the Pew Research Center that stated, "In 2013, the median wealth of the nation’s upper-income families ($639,400) was nearly seven times the median wealth of middle-income families ($96,500)" This is shocking that on average upper class families make 7 times more than middle income families. This is particularly concerning because upper class families don't spend the same amount proportionally. What I mean by this is a hot dog for someone in the upper class doesn't cost 7 times as much as for someone in the middle class, it costs the same. For the upper class people the percentage they spend on certain consumer items (food, clothing, toiletries) is not nearly as much as for a middle/lower income person.

It is very important to consider critically when it comes to issues like these. Nobody tells the full story.
Posted by Joesh at 9:39 PM No comments:

Tesla Sales: How Do They Work?

Last semester I posted about the governments of certain states trying to stop/limit the sales of Teslas. A couple months later equipped with more knowledge, I'm ready to attempt  to explain this topic more in depth.

There must be a reason why these states don't want Tesla's being sold directly, right? Right. Dealers are mostly run the same way. They pay a certain fee to the manufacturer and the manufacturer gives them a certain allotment of cars they can order from the factory. The more money they pay to the factory, the more allotments they get, the more cars they can sell. On top of just selling cars, dealerships service cars too. Dealerships get cars that need servicing, service the car, and then bill the factory for parts they had to use and labor time. This is where dealers can be dishonest. They can replace a part on a customer's car that doesn't need replacing, and bill the factory for it, receiving more money than they've spent. This costs the factory, and thus, the cost of servicing and buying cars is higher to offset this cost.

This is where Tesla's direct selling comes in. Since cars are being sold directly to consumers from the factory, the store doesn't have to pay for the factory for an allotment for a customer's car to be built, this saves money, and thus allows the car to be sold for cheaper. Service works the same way. Since the store is an extension of the factory the store has no reason to cheat or be dishonest to the factory the factory won't have to spend extra money, thus allowing the price of parts and the cars to be cheaper.

This, as a whole, is extremely beneficial for consumers because, hey, who doesn't want cheap stuff.
Posted by Joesh at 3:46 PM No comments: